This is for kind information to everyone that a fake website of Prācyā has been found on the web by the address – Pracya.org. Therefore, we would request our valued readers and contributors not to interact with the said website. Our authentic website is www.pracyajournal.com. We do not have any other website.
Due to some technical problem 2021 issue could not be uploaded 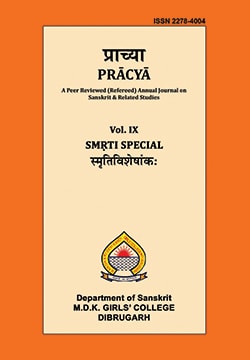 The XIVth volume of the journal will be brought out as Upakathā viśeṣāṁkaḥ (Special issue on Fable Literature) and we call for papers on Fables in Sanskrit, Buddhist & Jain literature.
The fable as a narrative form is one which is used to teach a particular lesson regarding deficiencies in the human character. It generally involves animals which have been imbibed with human characteristics and the moral is intricately woven into the narrative. In Sanskrit literature, the origin of the fable is in some way connected to the Upaniṣads where the relationship between man and animal is often emphasised. However, the fable owes its connection to Nītiśāstra and Arthaśāstra, and thereby formulated to deal with both the political and practical aspects of life. The Pañcatantra Tales is a perfect example of this. Hitopadeśa is another example where worldly affairs and political wisdom is dealt with. In Pāli literature, the Jātaka Tales come under the category of fables dealing primarily with the various lives of Bodhi-sattva and in each of the stories the character of Buddha is associated with some virtue which is then elaborately integrated into the narrative. Again, there can be a problem in the story whose resolution is brought about by Buddha and the moral lesson is inculcated through the solving of the problem. In today’s world, the fable forms an ideal platform to not only explore the connection between real life problems and literature but also to exemplify the relationship between humans and other life forms including animals.
Deliberations on the topics with contextual relevance will find place in the journal. An abstract in English, not exceeding 150 words, must be sent along with the paper. Papers must be submitted only through ‘Submit Manuscript’ Portal between 1st January-31st March, 2022. Late submission of manuscripts will not be accepted. The writer must send the author’s declaration form which is available in the journal website along with the manuscript. An English subtitle must be provided if it is written in other than English viz. Sanskrit, Assamese, Hindi or Bengali. The Manuscripts in Hindi and Sanskrit and Bengali must be typed in Adobe PageMaker format and font should preferably be Krutidev (for Hindi and Sanskrit) Geetanjali (for Assamese and Bengali). English manuscript must be typed in Times New Roman. The papers will be published only after recommendation by Review Committee experts.
Scholars may send their queries to pracya.dib@gmail.com. But papers sent to this mail will not be accepted. Scholars are requested to go through Guidelines for publication before they send their Manuscripts.